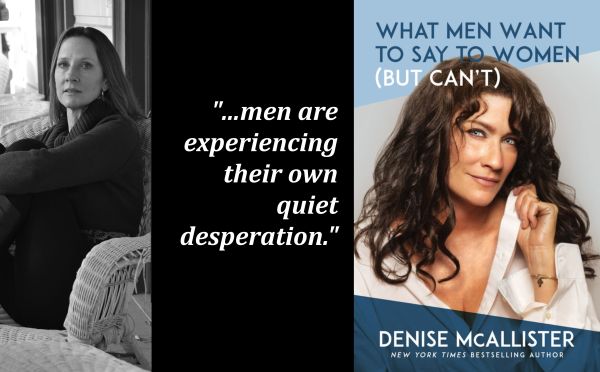 It’s rare when a book becomes a mirror, reflecting back your own experiences, prejudices, and yes, your own foibles. Denise McAllister’s new book, “What Men Want to Say to Women (But Can’t)” does just that, a daring yet wonderful springboard to begin a dialog with anyone and everyone, including friends, family, and co-workers.

McAllister’s very intimate examples and devout faith weave throughout her narrative of how men and women are innately created and endowed with unique yet complementary characteristics that have shaped humanity. As a girl, teen, wife, mother, career businesswoman and overall helpmate, McAllister has lived and worked in predominantly male environments, and she delivers her frank assessment of the failed promises of modern feminism with humor, self-deprecation, and lyricism. Her stated purpose: to tackle head-on the problems in ourselves, our relationships, our culture, and our civilized society.

Applying her theory that women’s self-image is wrapped around WHO they are, and that men’s is about WHAT ACTIONS they take explains many complaints about inequality and unfairness in the workplace. She is spot-on about the “Queen Bee Syndrome”, something I’ve written about myself (see below for links), and shares quotes from men on their frustrations of working side-by-side with women, especially as it relates to taking accountability and handling criticism or failure. Hmm, did a few of her examples hit a little close to home? Yes, I admit it, but letting the truth hurt allows you to learn from that mistake and never make it again. McAllister’s candor about her stumbles dares readers to acknowledge their own painful truths, at least in the privacy of their minds.

In the broader context, McAllister notes that men’s goals are not only to protect the family, but to serve others in the cause of the greater good. Male entrepreneurs certainly swing for the fences in trying to change the world, as exemplified by Thomas Edison to Steve Jobs to Elon Musk. Whether they succeed or not is besides the point, it is that they are highly motivated to tackle great challenges. The companies started by women tend to be more singular-focused solving an existing problem of a personal nature rather than breakthrough ideas for society: Mary Kay Cosmetics, The Honest Company, even Theranos. Perhaps the complaints about equal opportunity in business can instead be seen through the perspective of the measurement of perceived success, as instinctive behaviors for both genders may dictate how we choose to pursue our life’s calling.

McAllister’s style is often beautifully compelling, describing men as “Tenderness, love, strength, and wonder. A man is a glory to behold, a power to respect, and a heart to treasure.” Lest you believe that McAllister’s unabashed praise of men is out-of-step with the mainstream, let me point out that the bestselling genre of books is romance, with strong male heroes who protect and defend their loved ones. Many, many women want to imagine themselves with that kind of man, proven by the decades-long success of these “unrealistic” stories—which feminists deride as misogynistic or at best old-fashioned. But are they? McAllister’s point is that if we support men to be the best they can be, rather than tear them down for simply being their innate masculine selves, women will again be able to find the kind of partner to be at their sides through life’s journey of unknowns.

This book can and should be read by men and women alike. Hopefully men will be able to feel respected again by McAllister’s affirmation and celebration of what makes them men. And women can learn a thing or two about how to relate to the men in their lives, and where they may be able to help their sons and daughters cope with a society that is increasingly toxic to anything other than the tyrannical feminist agenda demanding power over equality, and ultimately taking away our freedom. By demanding men change their very essence, McAllister postulates that “men are experiencing their own quiet desperation.”

As a journalist, McAllister did her homework, citing eye-popping statistics on the legal system’s institutionalized discrimination against fathers and their heart-wrenching responses. Her wit shines through as she references Gail Collins’ America’s Women: 400 Years of Dolls, Drudges, Helpmates, and Heroines:

“Women were expected to enjoy sex,” Collins writes. “Most people believed conception could occur only if a woman reached orgasm.” I wonder if some wise older woman spread that rumor for the benefit of ladies everywhere.

McAllister even quotes Shakespeare’s Taming of the Shrew as one of many examples of how male/female relationships have been portrayed through the ages as achieving success. One of my favorite plays, I have bemoaned its fall from grace as it has been considered politically incorrect to perform. And I’m sure McAllister would be dismayed, but not surprised, to learn that it has been resurrected with an all-female cast in Chicago, flipping the story on its head in order to earn the sanction of modern-day social justice warriors.

My only quibble with her arguments is her inability to keep an objective, emotional distance as she briefly describes her infamous altercation on Twitter, which led to the termination of her work contracts. According to a simplified version of her theory, women protect children, men protect family. Yet she is surprised when she reversed roles and came out swinging in anger against critics on Twitter to protect her husband, and lost her contracts as a result. While she says she accepted the consequence of her actions, a consistent pattern throughout her life, when a man did the same thing to protect his wife, she is dismayed that his male co-workers supported him and he was able to keep his job.

Blaming it on an immature “boy’s club” running the company rather than admitting she let her emotions get the best of her is the typical female response—and in the face of men reminding her that this is standard male bonding at its best or worst. If we are to accept her premise that men strive to protect and support their families, why would she be startled that this is how men behave at work? Perhaps it does reflect a level of immaturity of the men running that company. Certainly, our country is fed up with the immature men who run Silicon Valley tech companies without the breadth and depth of wisdom, experience, or conscience to make better decisions considering the scope and impact of their products. Kudos to her for including rather than glossing over the controversy, as it demonstrates she is not on a soapbox preaching to us while she portrays herself as perfect.

In fact, McAllister’s entire book is a personal journey of hard knocks, tough choices, juggling relationships, and reflection. The fact that she dares to speak the unspeakable with such unabashed fervor and commitment is commendable. Undoubtedly she is setting herself up for more condemnations from the most vocal members of the feminist movement. But ladies, if we are truthful, we know the promises of hyper-individualism and total independence hasn’t worked to better our families or our culture. Isn’t it time to try a proven approach, updated for the 21st century, and see if we can re-create the happiness and passion that comes through love and respect? As McAllister states,

Love is intrinsically connected to freedom, and freedom is essential to our identity as human beings.

Read more of Ann’s thoughts about women in the workplace:

Where Are The Influential Women in Silicon Valley?

Sex in the Workplace

Mirror, Mirror: What Do Selfies Say About Us?