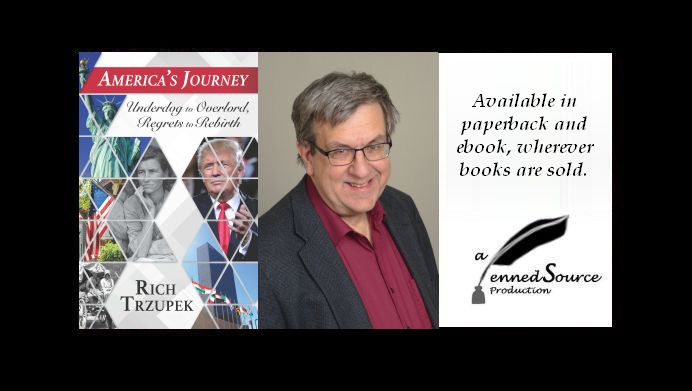 Underdog to Overlord, Regrets to Rebirth

From John Muir to Chicago and Barack Obama, Nikola Tesla to Tom Wolfe and The Electric Kool-Aid Acid Test, America’s influential leaders and quirky personalities reflected the goals, opportunities, and challenges of each era. In the early centuries, adaptive tactics succeeded, innovation abounded, and virgin territory beckoned. Exceptionalism was a source of pride, proof of America’s rebelliousness against European traditions. Americans viewed themselves as hard-working up-and-comers—nothing more, and certainly nothing less. But twentieth-century global conflicts drew them from their isolated paradise into the muck of war, and America’s dominating, earth-shattering strength created a mantle of superiority and accompanying remorse. Any sheen of national unity withered away as political, racial, economic, technological, generational, and religious conflicts shaped our discourse and choices.

In a delightfully easy, personable style, Rich Trzupek illustrates the good and the bad of our nation’s character through the ages, drawing on obscure, fascinating stories about unsung heroes and the extraordinary issues that have brought us to this virulent debate over America’s values…and its future. An unabashed believer in America’s resilience, Trzupek argues how the election of Donald Trump represents a rejection of the recent apologist attitude, and hopefully sets the stage for a return to the traditional patriotism that created America’s greatness.

A must-read if you wonder how the spirit of self-loathing, relentless accusations of Islamophobia, and schizophrenic media ever developed. Delve into the essence of America’s key moments without wallowing in irrelevant historical details, and be inspired all over again.

America’s Journey: Underdog to Overlord, Regrets to Rebirth, is the culmination of Rich Trzupek’s lifetime dream: a narrative presentation of American history and politics. As a prolific writer, Rich has spent his life delving into topics that interest him far afield from his career expertise. His multi-faceted commentaries have appeared in national publications and websites, such as Reuters, Breitbart, and Townhall. His newest weekly column in The Epoch Times supplements his long-time column in Examiner Publications, A View from the Cheap Seats, a favorite for readers in the western Chicago suburbs for over fifteen years.

Rich is one of the nation’s leading air-quality experts, currently serving as a highly regarded consultant to industry and providing expert testimony to the US House Committee on Energy and the Environment. Based on his 25+-years in the field, he has authored two books: The Air Quality Permitting and Compliance Handbook, and Regulators Gone Wild: How the EPA is Ruining American Industry. A native Chicagoan whose father supported his large family working in the nearby steel mills, Rich is the proud grandson of Polish immigrants, earning his Bachelor’s Degree in Chemistry from Loyola University of Chicago.